Leading nuclear researchers from across Europe visited the Nuclear AMRC as part of a tour of key UK reserch facilities.

The UK Tour of Nuclear Research Facilities was organised by the UK Science and Innovation Network team from the British Embassy in Switzerland, and included senior figures from organisations including: 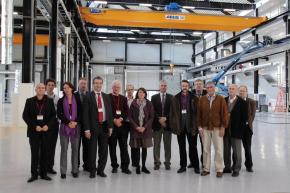 During their visit to the Nuclear AMRC, the group heard about the centre’s operations and how it works with companies along the civil nuclear supply chain. Operations director Steve Court explained the centre’s work in manufacturing process R&D and support in training, quality and business development.

The Nuclear AMRC is focused on supporting the UK nuclear manufacturing sector, but works with institutions and companies across Europe on collaborative research projects addressing major industry issues.

The visitors also heard Professor Neil Hyatt of the University of Sheffield’s Immobilisation Science Laboratory (ISL) talk about other world-leading nuclear research in Sheffield. The ISL is the UK’s largest research group focusing purely on nuclear waste management. It is developing innovative technologies in areas such as large-scale vitrification of waste, and remediation of land contaminated by depleted uranium munitions.

Hyatt also introduced the Nuclear FIRST doctoral training centre, a collaboration between the Universities of Sheffield and Manchester. 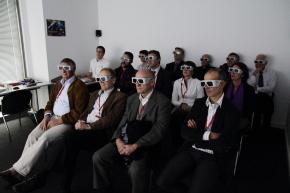 The party were then given a tour of the Nuclear AMRC’s new facility at the Advanced Manufacturing Park in South Yorkshire, and a demonstration of  virtual reality technology used for design, simulation and training.

The four-day tour also included a visit to the new Nuclear AMRC Laboratory at the Dalton Nuclear Institute in Manchester, plus the new Dalton Cumbrian Facility and the National Nuclear Laboratory in Sellafield, and Imperial College London.

The tour provided an overview of the nuclear sector and research community in the UK, with a focus on developing contacts to help UK and European researchers work together on collaborative projects.

The UK Science and Innovation Network is jointly funded by the Foreign and Commonwealth Office (FCO) and the Department for Business, Innovation and Skills (BIS). This tour is part of a series of events organised by the Science and Innovation team in Berne (Switzerland) in support of the British Government’s commitment to nuclear energy as a key component in delivering the UK’s low carbon economy.

Kennametal to collaborate on machining innovation